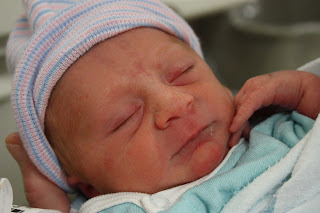 Wednesday I woke up having contractions.  They went on and off all day long, and when I woke up Thursday they were back.  When they checked me on Wednesday I was 2cm, when they checked on Thursday morning I was 4cm.  So...I was making progress but nothing was regular so they decided to give me a little pitocin to get things moving, much like what happened with Ingrid.  I started Pitocin at 8:30am and then my contractions...stopped.  They didn't really pick up again until after eleven.  I handled them pretty well with breathing, but because I was strapped down to the bed with all kinds of monitors I couldn't get comfortable.  I kinda hate the clinical setting of a high risk labor and delivery floor.
Then things really picked up and it started to HURT, so I opted to get an epidural.  Ahhh, bliss.  The relief from all that pain is really great, and I wish I could be all excited to not take drugs and stuff, but I'm not.  I liked both my epidurals!  Things got kind of crazy, Otis' heartbeat was irregular, they thought he probably had his cord around his neck (which he did) so they made me lie on my side.  I ended up with an IV of pitocin, my epidural, a blood pressure cuff on constantly, the pulse/ox thing on my finger, and monitors on my belly.  I jokingly said ahh, what else could I possibly have on me?  Then I found out--an internal monitor on Otis' scalp, a tube into the uterus to pump fluid since it was so low and they thought maybe the cord was being compressed, a catheter, and finally, an oxygen mask.  Oh my god, it was the most clinical hospital birth, the most opposite of what I had thought of having this time around! 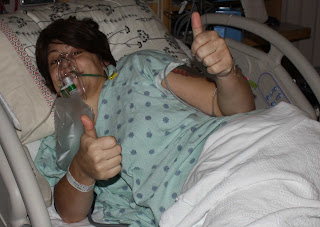 But everything went well and after a few hours I was feeling pressure, they checked me, I was 10cm, and I got rolled back to the OR.  Again, totally clinical!!  I had four male doctors down there (it's a teaching hospital so I always had four or five doctors in different phases of their schooling...) and two pregnant nurses by my side, and some doctors from the NICU, and finally Brendan.  He said he counted 12 people in the room.  So here I am sitting spread eagle in the stirrups having a baby and people kept coming in and out of the OR, the door to the hallway was open, it was definitely not a place for a modest person!  With three contractions I pushed that little guy out.

He did great right away.  No problems with breathing, he pinked up right away, and he was almost five pounds.  I got to have some skin to skin contact before they whisked him away to the NICU, which was more than I thought I'd get, so I was happy. 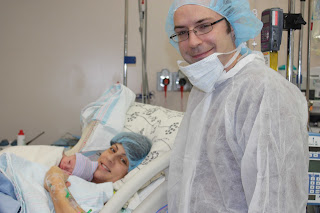 Once Otis was gone off to the NICU to warm up and get cozy, my fun started.  My placenta refused to come down so they had to manually remove it.  IT HURT.  People pushing down on my uterus, with hands up to my uterus trying to grab it.  Oh my god, and did I mention that because I had to lay on my side for Otis' heartbeat my epidural stopped working on one side?  And of course that's the side the placenta was on so I felt every single freakin' thing.  I'm more sore from that than I am from actually giving birth...Finally they got it to come out, and I got to go back to my room and relax and be totally amazed that I had just given birth to a little boy that I hadn't planned on meeting for six more weeks!

He is doing great.  Breathing's good, he gets his bloodwork tomorrow and will probably have to be under the blue lights for jaundice.  He has latched on and I got to give him my colostrum I'd pumped, but now there's nothing there.  I pump and pump and nothing.  Two drops maybe.  They tell me it's normal but it's hard to see empty bottles after pumping...Once he gains some weight and learns how to eat properly he can come home.  Until then, we visit in the NICU and spend as much time with him as we can. 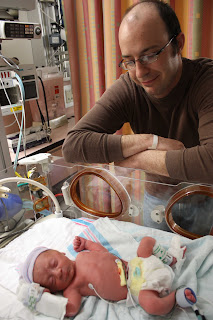 Ingrid got to meet him today: 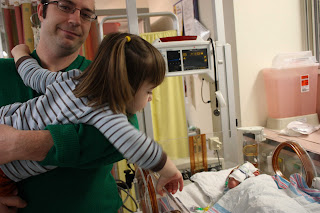 She was excited to go see him, and then five seconds after we were in there, she wanted to leave.  We'll see how well she does over the next few days!  I'm home now so we'll be back and forth to the hospital but I won't have to sleep in an uncomfortable hospital bed anymore, yay!!  And pretty soon we'll be all together as a family and the real fun will begin :)
Posted by Amber Liddle at 6:09 PM

Congratulations on The Birth Of your Little Otis!! My 2nd Son was Born at 36 weeks. It was hard to leave him. You will all be together soon:) love the thumbs up picture!!

It seems like it all worked out as best as we could hope!!! I'm so happy for you. Congratulations again and again :D !!

Congratulations!! So glad that he's doing well. We'll keep you guys in our prayers :)

Congratulations!!! He looks beautiful! I keep planning natural births, too, but they haven't worked since Emma (whose birth was perfect). I hope you get some milk from all that pumping soon, and that everything goes well so you can all be home together!

huge congrats to you! what an ordeal!!

Awesome, and your birth story made me laugh! I also had very medical births which were the total opposite of what I planned, but now (a few years later) that doesn't matter at all.
And hang in there with the pumping. It took 4 days for my milk to come in (both times) so it will happen, and it will get easier.
Well done Amber and welcome baby Otis.

wow! i am so happy for you that he is here! congratulations liddle family!

Amber Liddle
Milwaukee WI, United States
I'm mom to Ingrid and Otis, wife to Brendan. We live a simple life in the midwest and dream of travels to far away lands when we have money and time. We try to be conscious of our imprint on the earth but hate to call ourselves "green." I like to sew, bake and do crafty things while watching my kids grow and learn.

These People are Lovely